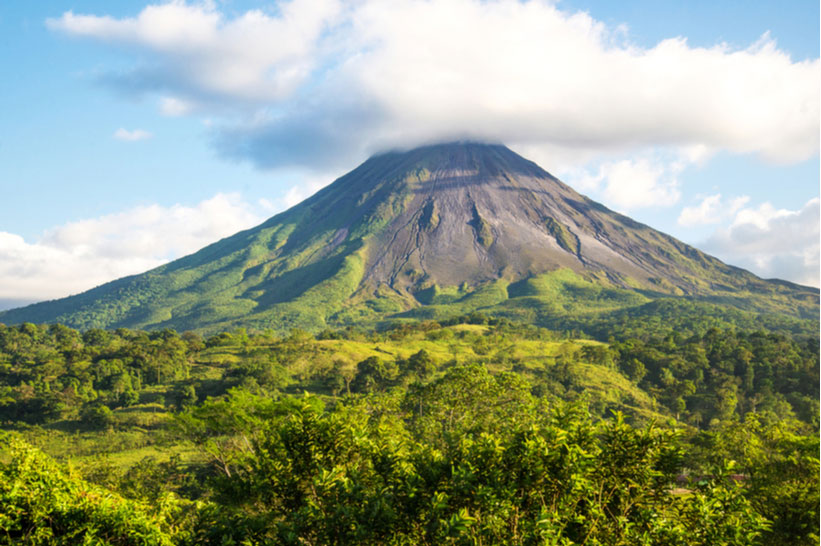 Costa Rica features a number of picturesque volcanoes, six active and 61 dormant or extinct,  and the Arenal Volcano is among the best. The tallest volcano in Costa Rica, it’s perfectly shaped cone is visible for miles around from its position in the northern lowlands. An imposing site, the Arenal Volcano is the most popular and most visited in Costa Rica due in part to the plethora of activities you can enjoy in the area.

The Arenal Volcano stands picturesquely above La Fortuna with its classic symmetrical cone shape. For volcano novices, Arenal is a stratovolcano, developed over thousands of years of layering of lava, rock, and ash. Arenal is tall at 1,600 meters (over 5,300 feet) with a center crater measuring 140 meters (460 feet). The volcano, at over 7,000 years old, was dormant for hundreds of years until the famous eruption of 1968. That eruption covered five square miles with rocks, ash, and lava. The day ended tragically with 87 dead and three villages built on Arenal’s slopes destroyed.

It was on that day, the single surviving town was renamed La Fortuna, the fortune. Arenal Volcano was named a national park that year as well. It was Costa Rica’s most active volcano for more than four decades until 2010, when the lava, ash, rocks, and gas ceased to spew with regularity. Scientists state that Arenal is currently in a resting phase which can end at any time.

On calm days Lake Arenal offers a mirror image of the Arenal Volcano. The largest lake in in the country at 33 sq miles, Lake Arenal is actually a man-made lake built to provide hydroelectric power to Costa Rica. The lake not only adds to the incredibly natural beauty of the Arenal Volcano area, it also creates an ideal spot for water based activities like kayaking, stand-up paddle boarding, jet skis, and even bass fishing.

The Sights, Sounds, and Adventures of Arenal

Though Arenal is currently at rest, it’s absolutely still worth a trip as visitors will enjoy natural beauty surrounding the stately volcano and a host of eco and adventure tours. For the adventurers, the Arenal area offers a wide array of activities including hiking, waterfall rappelling, rafting, caving, mountain biking, ATVs, and zip-lining through the rainforest. It’s for this reason that Arenal is known as the ‘adventure sports capital of Costa Rica.’ Those who enjoy more laid-back or nature-based activities can enjoy things hot air balloon ride, horseback riding to the La Fortuna Waterfall, calm river safari floats, and the famous hanging bridges. Of course no visit to Arenal is complete without spending at least one night in the hot springs. There are several different facilities that provide the opportunity to take a relaxing dip at the end of a long day, some cater more towards families with kids while others more toward adults.  These all-natural thermal hot springs are overflowing with the mineral-enriched waters a result of the hot magma beneath, so it’s an experience that all visitors must do.

The town of La Fortuna has experienced as much growth as any region of Costa Rica over the past decade. In the past most accommodations here were simple cabinas or bungalows, but now the entire area is dotted with luxury four and five star hotels including the award-winning Arenal Nayara and Nayara Springs. Being the star of the show, it goes without saying that nearly all accommodations were built to feature breathtaking views of the volcano. Most properties feature lavish gardens and pools with swim up bars to enjoy the views, but a few select hotels also have their own thermal hot springs on-site like the boutique El Silencio del Campo or the world famous Tabacon Resort & Spa.

When you are ready to spend some time in Costa Rica, we are ready to help you plan your perfect Costa Rican adventure complete with Arenal Volcano National Park’s thrill seeker activities, laid back relaxation, once-in-a-lifetime tours, and spectacular accommodations.