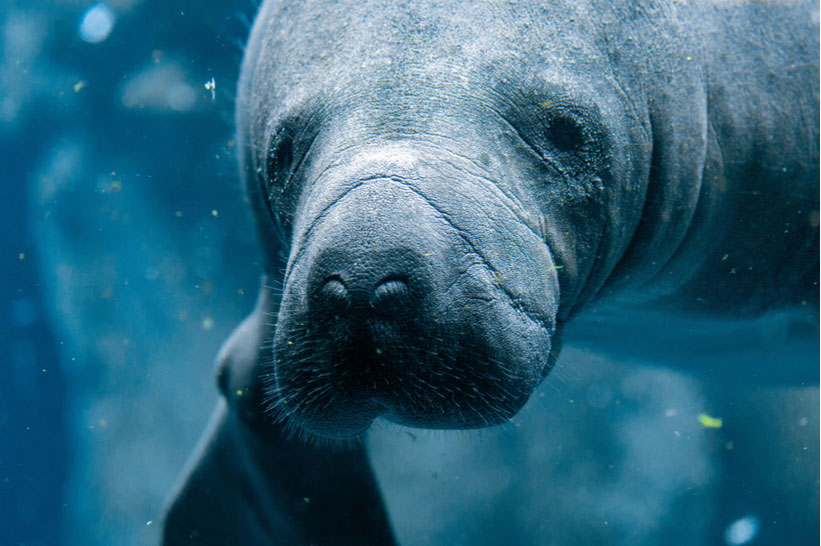 Manatees are commonly sighted in Central America, traveling up and down the Caribbean and Pacific Coasts. Manatees, also called “sea cows”, are known as Trichechus manatus in the scientific community. Once mistaken for mermaids by roving sailors, the manatee makes its home in shallow coastal waters, rivers, lagoons, canals, and estuaries. Able to live in brackish, fresh, or salt water, manatees are found in tropical and subtropical regions. Manatees are gentle giants, growing up to 13 feet in length and weighing near 1,300 pounds. Because they are mammals, manatees breathe air which requires them to surface frequently while swimming. Manatees feed on water plants and along with plants at the water’s edge, eating up to one pound of food for every 10 pounds of body weight per day.

Swimming and Diving with Manatees

Manatees are found in many destinations in Central America almost year round. When you see manatees while diving, swimming, or snorkeling, there are some important tips to keep in mind. You should resist the urge to touch, chase, surround, disturb, poke, or ride the manatees you encounter because doing so can disrupt their natural behavior. Observe these gentle animals from a respectful distance remembering that these wild animals need to survive in the wild.

Belize features Central America’s largest concentration of manatees, which are also part of the United Nations Environmental Program. Manatees love the fertile feeding grounds and safe shelter of the western hemisphere’s largest coral reef, the Mesoamerican Reef. You can find these gentle giants in Belize’s maritime reserves, such as Corozal Bay Wildlife Sanctuary and Swallow Caye Wildlife Sanctuary. Other locations to see manatees in Belize are offshore at Caye Caulker and along the shores of smaller villages like the Placencia Lagoon area.

A prime spot for manatee viewing in Guatemala is Lake Izabal, a short trip from Guatemala City. This virtually untouched location offers a manatee-watching cruise along the Rio Oscuro and the beautiful Punta El Chapin beach. At the beach, swimmers often find themselves among the lake’s manatee population.

In Nicaragua travelers will find a large area of manatee habitat. The manatees of Nicaragua can be found in the wild in estuaries, lagoons, canals, rivers and shallow coastal shorelines. Visitors to San Juan de Nicaragua should visit the Manatee Sanctuary where these incredible marine mammals can be viewed easily in their natural habitat.

The Bay Islands of Honduras offer outstanding snorkeling along the Mesoamerican Reef where manatees love to gather. Not only will visitors enjoy close proximity to the manatees, but they will also experience diverse coral populations and an incredible abundance of tropical fish, rays, and invertebrates.

Tortuguero National Park is the best place in Costa Rica to see the country’s largest population of manatees swimming in the lagoons. In addition to Tortuguero, Costa Rica’s manatees frequent the sea grass beds of the Talamanca Coast and in the manatee sanctuary at Gandoca-Manzanillo National Wildlife Refuge.

Though manatees are not as easily spotted, visitors are most likely to find them in Bocas del Toro and Lake Gatun. Little is known of the Panamanian manatee population, but studies are ongoing and the population appears to be self- sustaining as protection efforts continue.