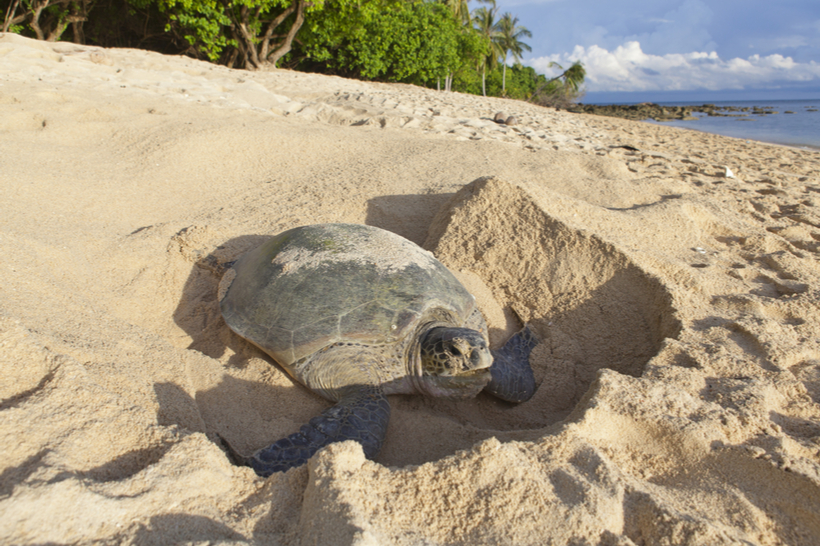 Costa Rica is the ideal location for families, couples, and nature lovers of every age to experience the beauty and mystery of sea turtle nesting. Sea turtles of varying species nest year-round in Costa Rica in a number of tropical locations – making any time of year a perfect time to visit. You simply need to know where and when so you can be in the right place at the right time, and that is where we come in! Are you ready to share in this moving experience?

Just imagine, sitting on a beach, gazing at the ocean as a massive sea turtle emerges. Slowly, not without struggle, she makes her way up the beach to its crest, unconscious of your amazement, solely focused on her mission. She pushes sand, digging until a huge hole appears before you. She gingerly lays her eggs. When her quest is complete, she covers her precious treasure and begins her trudging exit into the sea. And still you sit, emotional and affected by the miracle of nature you have experienced.

Tortuguero National Park and the village of Tortuguero, in the north Caribbean region is well-known worldwide for sea turtle nesting. From March through October, four species of sea turtles nest in Tortuguero. The nesting season begins with the Leatherbacks (May – March), followed by the Loggerheads (July – October). The endangered Hawksbills are evident on the beach throughout the season, though hard to spot. Atlantic green sea turtles are the most prevalent, with their peak nesting July through October, each weighing in at 400 pounds or more and laying as many as 700 eggs per season.

To the North of Tamarindo in the North Pacific region is Playa Grande one of the favored areas to catch a glimpse of the Leatherbacks, the largest of the sea turtles. October through March is peak season on the beach in Las Baulas National Marine Park where 800 or more giant Leatherbacks nest annually.

The Ballena National Marine Park in the Central Pacific region is just south of Dominical and serves as the favored nesting spot for Hawksbills and Olive Ridleys. You can catch a glimpse of these magnificent creatures nesting from May to November with turtle tours offered nightly.

Though the Nicoya Peninsula is tiny, it is host to significant nesting spots for these majestic, but endangered sea creatures. Near Nosara, the Ostional Wildlife Refuge remains famous for the massive (known as arribadas) nesting cycles of the Olive Ridleys from June to December. If you are lucky enough to be in the right place, you may find yourself witness to hundreds of these beauties overtaking the beach in a single night. To the south, near Samara, Playa Camaronal is the nesting home of leatherbacks, black sea turtles, Olive Ridleys, and Hawksbills, who next year-round.

Gandoca-Manzanillo Wildlife Refuge in the South Caribbean region serves as protected nesting grounds for the Leatherbacks and Hawksbills nesting there all year long though your best chance to see them is April through October. Turtle tours are offered here nightly during nesting season.

Costa Rica is the perfect destination to experience sea turtles in their favorite nesting grounds. Now is the time to schedule your sea turtle tour in Costa Rica where it is quite possible you can see nesting and hatching during your adventure!