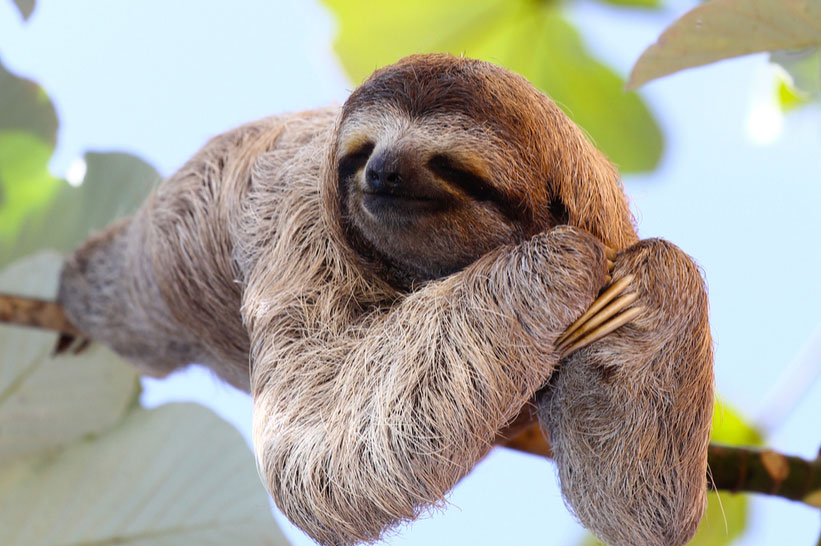 According to the World Wildlife Fund, there are number of endangered species in Central America – among them is the very recognizable three-toed tree sloth indigenous to the tropical rain forests of Central America. If you’re lucky, you might catch a glimpse of one of these slow-moving tree-dwellers on your next Central American Adventure.

Three-Toed Sloths are known by the scientific name Bradypus, and for the truly nerdy among you, is from the Greek for “slow feet.” They are a part of the Phylum Chordata and the Class Mammalia (you know, Mammals).

They are herbivores (plant eaters) munching on leaves, buds, and twigs from their canopy homes and digesting them with their four-part stomachs and the bacteria within. The process is slow, like the three-toed sloth itself, with digesting taking up to one month for a single meal.

Living up to its name, “slow feet,” the three-toed sloth and its cousins are known as the world’s slowest mammal. So much so, that its sedentary lifestyle allows algae to grow on its furry, making its leafy home in the tree tops the perfect camouflage from predators.

Three-toed sloths feature long claws – often up to 4 inches – giving them a powerful grip on their tree-top homes, while making life on the ground difficult and dangerous.

Sloths spend virtually their entire lives in the same tree, sleeping curled in the fork of their tree or hanging from the branches by their claws.

Eating and sleeping are the sloths favorite pass times all done from the comfort of their rainforest canopy homes. They often sleep from 15 to 20 hours a day, with nocturnal eating filling the remainder of their solitary lives. Their nourishment comes from the plants they eat, as does nearly all their water.

Three-toed sloths only leave their trees when relieving themselves taking or an occasional swim, often dropping directly from the tree into the river below. Sloths, while not good on land are surprisingly strong swimmers.

These mammals even mate and give birth while hanging in their beloved tree homes. Three-toed babies cling to their mothers – for at least the first nine months of their lives – when female sloths leave their shared tree home to their youngster and move to a new home.