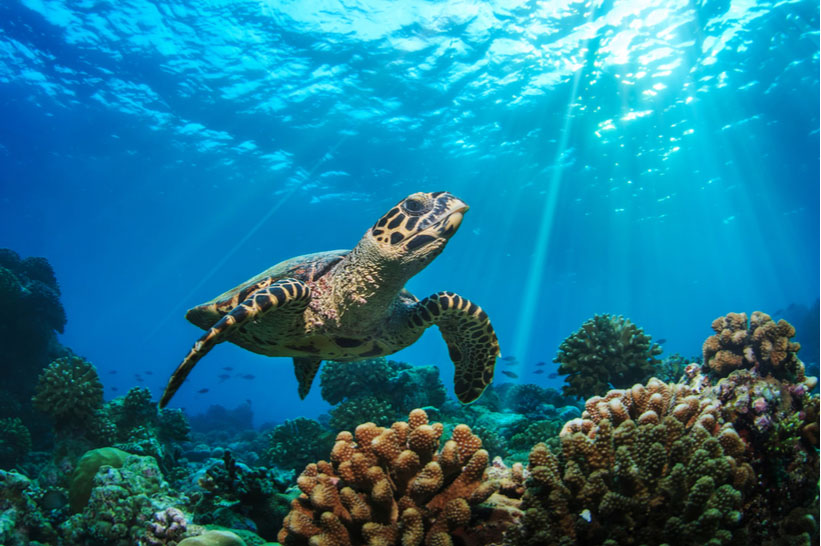 There are a number of endangered species in and around Central America according to the World Wildlife Fund – among them is the intriguing sea turtle. Now, technically, these prehistoric animals are only temporary residents of Central America, dwelling full-time in the sea, but a number of sea turtle species arrive every year to propagate the species. If you plan your Central American Adventure just right, you might find yourself face to face with these majestic creatures.

Sea turtles are known by the scientific names Cheloniidae and Dermochelyidae. They date to the time of the dinosaurs. In size, they range in length from two to six feet and can weigh from 80 to more than 1,000 pounds. Unlike other turtles, sea turtles do not retract their flippers and heads into their shells. In addition, sea turtle shells (carapaces) are specialized to aid in swimming underwater.

Sea turtles feed on aquatic animals and plants like jellyfish, crabs, snails, shrimp, mollusks, sponges, seaweed, and algae. Though Green Sea Turtles can remain submerged for up to five hours, a dive for feeding typically last only five minutes.

Sea Turtles are found throughout the world, migrating hundreds of miles annually between their tropical and subtropical beach nesting grounds and their aquatic feeding grounds. Because much of a sea turtle’s life is spent in the water, little information is known about their underwater lifestyle. It is even difficult to gauge the number of sea turtles in the world, because the males and juveniles never return to the beaches from which they emerged.

Sea turtle behavior comes from the observation of females laying eggs and the hatchlings which emerge and race to the sea. Female sea turtles return to the nesting grounds where there were born to lay their eggs. Emerging from the water, they did their nest onshore with their powerful back flippers, bury their eggs (between 70 to 290), and head back into their watery home.

The babies hatch in six to 10 weeks, often taking an entire week to dig out, always at night, making the dangerous trek to the ocean. If they survive, they will live a solitary life until they mate. Mating season, dependent on the species of sea turtle is from March to October.

Sea turtles are essential in maintaining the health of marine ecosystems including coral reefs and seagrass beds which in turn benefit shrimp, tuna, and lobster. In addition, having been around for over 100 million years makes them scientifically and historically significant.