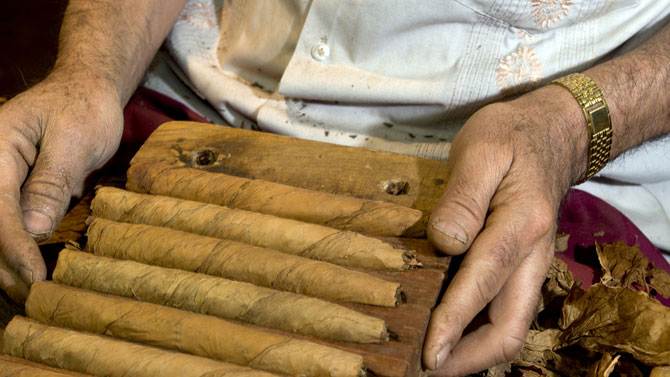 The History of the Cigar

In the Pre-Columbian Americas tobacco was used by the native peoples for both healing and ceremony. Christopher Columbus arrived to the “New World” and quickly discovered tobacco being cultivated and smoked by the Native Americans. The word tobacco was used by pre-Columbians and adopted by Columbus and his men and the Mayan term for smoking morphed into the Spanish word cigarro.

Columbus claimed a large island known to the natives as Colba (Cuba) who called the dried tobacco leaves cojoba. Columbus quickly realized tobacco had potential as a valued commodity and carried tobacco leaves and seeds to Europe. It failed to capture the attention of Europeans at first but a short time later Jean Nicot (nicotine’s namesake) of France began to promote it. Nicot was followed by the Portuguese who began cultivating the plant and its popularity took off. Pipe making and cigar rolling quickly followed as smoking swept across Europe and the rest of the world.

Fast forward to the 19th century where Cuban migration made Ybor City (Tampa, Florida) the Cigar Capital of the World, a title the city held until the middle of the 20th century. The 1950s opened the doors for larger international trade and later in the 1990s and beyond, cigar sales grew exponentially.

Honduras and Nicaragua are the premier cigar growers and manufacturers of Central America. Each country’s cigars are unique featuring distinctive taste and character a result of varied soils, curing processes, and rolling techniques. Along the Honduran and Nicaraguan border is the heart of the region’s tobacco plantations and cigar factories. The economy of these regions relies on the cigar industry which includes farming, curing, manufacturing, and exporting.

Honduras’ climate and soil provide an ideal environment for growing tobacco and producing a strong intense flavor and distinct aroma. Honduras is currently among the largest exporters of cigars in the world with each brand producing a unique feel, taste, and aroma.

Even before Nicaragua cultivated tobacco for cigars the country was well-known for its distinguished cigarette tobacco. Nicaragua’s rich volcanic soil delivers a superlative environment for growing tobacco. Today Nicaragua produces premium cigars with an exclusive curve of flavor and are among the finest in the world.