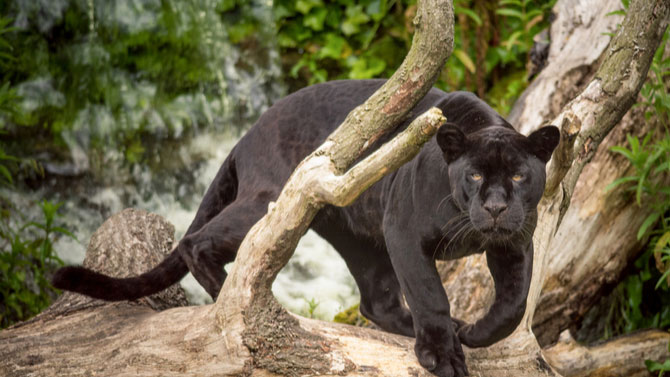 The black jaguar is one of many endangered species in Central America and South America according to the World Wildlife Fund. As a formidable hunter, the black jaguar plays a fundamental role in the ecosystem of the area’s dense rainforest. When you plan your visit to Central America’s tropical rainforest, watch closely and you might catch a glimpse of this sleek, majestic cat.

The black jaguar, Panthera onca, is a rare color variant of the onca species. It gets its name from the word yaguar the Indian term meaning, “killer which overcomes its prey in a single bound.” Black jaguars are the largest big cats in Central and South America weighing as much as 250 pounds with lengths of more than seven feet. These big cats are excellent climbers and swimmers and can even hunt in water.

The black jaguar’s unique coloration provides excellent camouflage in the dense rainforest. The color of a black jaguar’s coat is not black but dark brown. Like yellow hued jaguars, black jaguars have spotted markings known as rosettes which are only visible in bright sunlight. The black jaguar’s coloring is a result of surplus melanin, the same pigment which is responsible for skin, hair, and eye color in humans and other animals. The melanistic trait is a dominant gene mutation which causes the fur to be very dark brown. While fair-colored jaguar pairings only produce tawny-colored offspring, black jaguars can produce both fair-colored and black cubs.

Both black and tawny jaguars were hunted to extinction in the United States in the 1940s. Today, the few that remain live in Mexico, Central America, and Brazil. The largest populations reside in the Pantanal which includes Mato Grosso, Brazil and parts of Paraguay and Bolivia as well as Chiapas State, Mexico and the Yucatan Peninsula including Guatemala and Belize.

Black jaguars mate year-round. Following a gestation period of 100 days, females produce small litters of two to four cubs. The cubs are cared for and protected by their mother until they are a year old and will remain with the mother for up to two years. Mature black jaguars are solitary animals that mark their territories as all big cats do with tree markings and urine. Like other big cats, black jaguars communicate with grunts, roars, and meows.

Black jaguars dine on virtually all animal prey in range, but seem to particularly enjoy peccaries (wild pigs) and capybaras (massive rodents). Also on the menu of black jaguars are fish, tapirs, and caiman (alligator like reptiles). Once thought to be nocturnal hunters, recent research has discovered that black jaguars are active and energetic throughout the daylight hours.

Black jaguars are crucial to their ecosystem – one of the most vital ecosystems in the world – the tropical rainforests. Protecting the black jaguars means fighting against deforestation and forest fragmentation in Central and South America and spreading the word about the species and the threats they face.