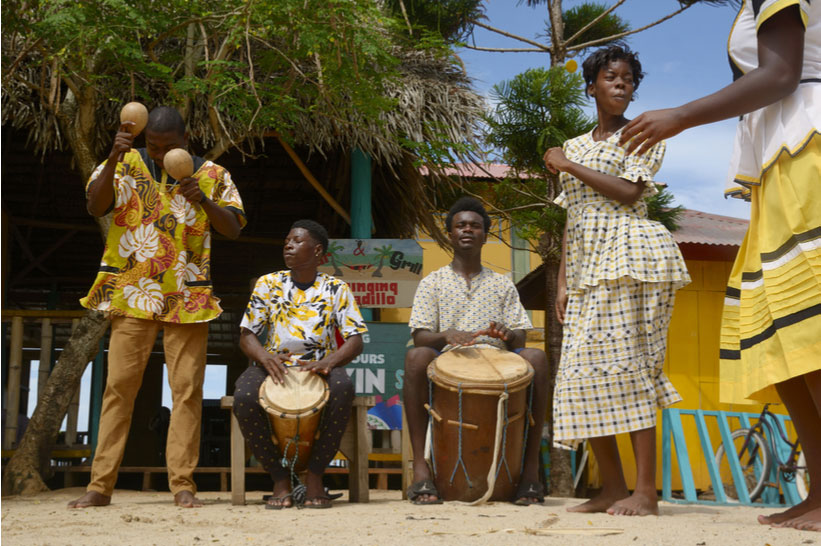 The History of the Garifuna

The history of the Garifuna begins with the Arawak who settled the Greater Antilles in the Caribbean from Guyana, Venezuela, and Surinam. Later the Carib Indians of South America seized the Lesser Antilles around 1220 A.D. The Caribs were robust though small in stature with long, black hair. The Caribs subdued the Arawak and these people groups eventually intermarried and populated San Vincente. In 1635 two Spanish slave ships shipwrecked in the region and the surviving Nigerian slaves gained refuge among the Carib-Arawak adopting the customs and language. And thus the Garifuna became a new ethnic group.

In the years to come, the Garifuna found themselves in search of a peaceful homeland. The French and British fought over the region for many years. A treaty brokered with the British for possession of island was soon broken and the Garifuna fought for survival. Finally the Garifuna were deported to Roatán (Honduras). The Garifuna thrived there until the republican revolt when they fled to southern Belize under the leadership of Alejo Beni.

The Garifuna celebrate their heritage and their miraculous arrival in Belize annually in November as a testament to their optimism and positivity to flourish in their new homeland. This magnificent culture remains both socially and culturally unchanged today. They continue to use their own dialect, Igñeri (a combination of Arawak, Bantu, French, and Swahili), though most speak Spanish as well. They continue to participate in their unique religions practices carrying on the traditions of the circular and Punta dance, story-telling, and banana cultivation.

The Garifuna’s religious practices are a combination of African and Amerindian traditions along with a small measure of Catholic elements. The religion of the Garifuna also includes Gubida altered states of consciousness believed to be the result of dreams or possession.

The various communities of the Garifuna are still agriculturally based though the younger members believe fishing is better industry. The Garifuna live in towns and villages along the Atlantic Coast along the boundary of Belize and Nicaragua, where the land is fertile.

Most of the Garifuna live in small huts with ceilings of hay and walls of royal palm, sugar cane, and cement blocks. Today’s trend is leading the Garifuna to move to more modern housing materials from traditional styles. Education is still limited among the Garifuna. Without sufficient schools to educate the children the majority of the population remains semi-literate. A small percentage continue their studies beyond elementary school and a few immigrate to the United States while the remainder continue to be integrated into simple community life.

The Garifuna are not political people, believing they can best govern themselves without intervention from any legal entities. In some regions there is a governor who settles disputes and doles out justice among the people.

In 2001, the Garifuna culture was declared a “Masterpiece of the Oral and Intangible Heritage of Humanity” by UNESCO (the United Nations Educational, Scientific and Cultural Organization). Today 98,000 Garifuna live in the region between Belize and Nicaragua and when you travel to either country you should visit these incredible people and immerse yourself in their unique culture.